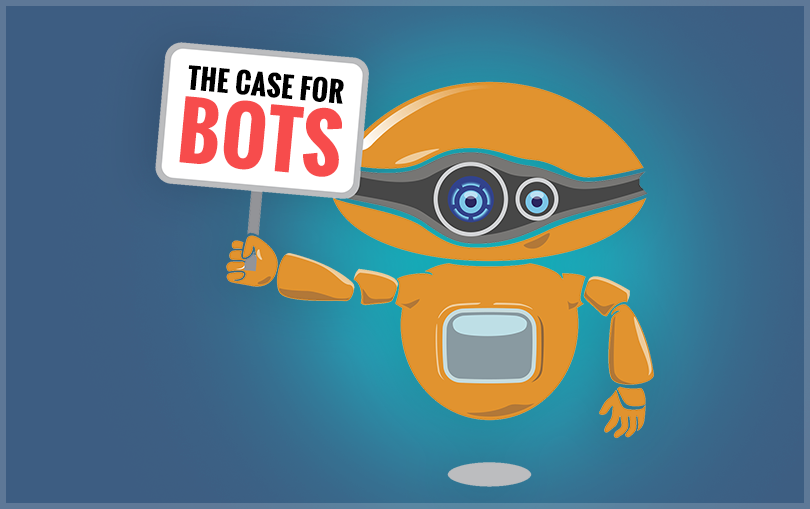 The Case for Bots

As of May 2016, 65 billion apps were downloaded from Google Play Store in a single year — a whopping 15 billion more than the download count in 2013. While apps continue to be popular, there’s a hot new tech in town! Chatbots have caught the world’s attention, with everyone from brands to small businesses testing them out.

Since we are in the business of both bots and apps, we thought we would do a quick blog on where bots provide a better experience than apps. Here are our observations.

1. Natural language: A major advantage that bots have over apps is how easy it is to interact with them. Sure, with efficiently designed apps, you should be able to get what you need with a few taps and swipes but with a bot, you can get that just by asking for it. Bots come with natural language processing [NLP] capability, which means they can understand natural human speech and respond accordingly.

2. Speed: Bots usually have a minimal interface — just a chat window. So they tend to be quicker and more responsive than apps. There’s also the advantage of getting to the information directly without having to tap through.

3. Memory Space: A Digital Trends study revealed that 80 to 90 percent of all downloaded apps are used just once. Most apps, unless they’re the ones we use very regularly, are downloaded, fiddled with and never opened again. Then they sit there, eating up memory space. Bots are a server site application, so there is no question of taking up any space.

4. Cost: Creating an app is only the first step. They need to be marketed, promoted, pushed constantly for people to download them. Bots, however, can be accessed through a number of messaging services, and everyone messages, right?

5. Convenience: Sometimes, people don’t download apps simply because they can’t be bothered. With a bot, that’s never a concern because the only app they need is their favourite messaging service. Hooray for convenience!

There’s no denying bots are an incredible technology, even at this early stage. And while they sometimes provide a better experience, it would be a mistake to say bots are about to kill apps, which crystal-ball gazers in the industry sometimes tend to do. After all, you can’t flick through a bot the way you can on your Amazon app, letting serendipity do its thing. So yes, the TV didn’t replace the radio, the Kindle didn’t replace the book, and the bot is certainly not going to replace the app, but rather, provide an alternative to those who want it.

Sorry. No data so far.